Is It Safe To Sleep With Candle Lit? Find Your Answer Here! 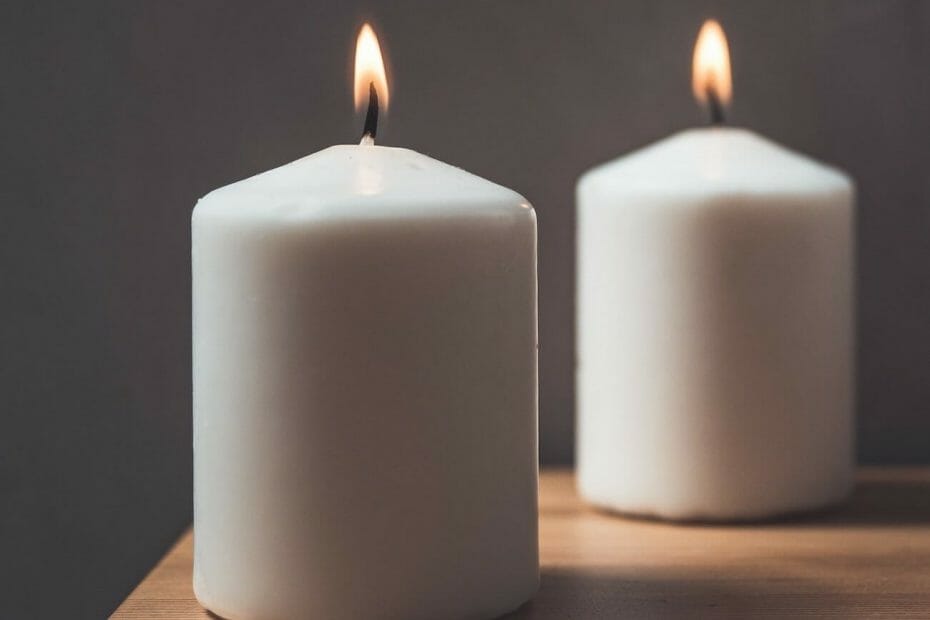 Is It Safe To Sleep With Candle Lit?

Candles can help relax you and put you to sleep, but is it safe for them to burn when they’re lit?

It is dangerous to go to sleep with a candle burning because when it gets closer to the bottom, the temperature within the container may rise to the point where the wax inside is ignited, perhaps causing a fire that spreads to neighboring bedding, books, and draperies.

Candles should never be left burning while you are asleep or unsupervised for any other reason, as willit would help if be also read. Moreover, you should read our article about Diptyque candles, whether they are toxic or not.

The ten risks of sleeping with burning candles

One of the biggest concerns people have when they sleep with lit candles or leave them unattended is the possibility of a house fire.

Even though most candles are designed to burn themselves out naturally, it is still possible that the candle could get hot enough to start burning itself and possibly set fire to nearby objects.

If the candles are near the bed, they could be accidentally tipped over by you, a cat, or someone else and set on fire.

Manufacturers frequently advise against lighting candles for longer than four hours because if the container is made of glass, it could break under the heat.

Any object moving through the air could be responsible for spreading fires.

NFPA is an American organization that provides information about fires and their hazards.

According to the NFPA, unattended candle fires caused 7400 homes annually between 2015 and 2019. These wildfires annually cause $290 million in damages, resulting in 670 injuries and killing 90 people.

According to the London Fire Brigade (LFB), using candles contributed to roughly 200 fires in London in 2020.

Thus, it is essential to extinguish all burning candles before turning them on for the night or use only flameless candles.

Candles can cause several different injuries, including:

The use of candles can lead to this typical occurrence.

Burns can occur when someone accidentally comes into contact with a hot object or if melted fat falls onto a part of the body.

A glass candle holder that has fractured or burst may be their source.

According to a study by the U.S. Consumer Product Safety Commission (US CPSC), hospitals treat approximately 8,900 injuries yearly from candle fires.

These hot candle holders include cuts caused by burning candle wicks, burns from hot wax and open fires, and scalds from hot wax.

Exposure to candles increases the risk of developing physical and psychological health disorders.

Candle wax dries out skin cells, causing them to lose their moisture.

Wax mostly consists of hydrocarbons, which means that it has carbon and hydrogen atoms in it.

As soon as a candle is lit, its top surface becomes a pool of molten wax.

Carbon and Hydrogen inside turn into carbon dioxide and water.

Capillary action causes the liquid wax to climb up the wick until it reaches the candle’s base, where it then mixes with oxygen from the air to create a chemical reaction that produces heat and gas.

This heat melts more wax, and the combustion process keeps on.

Experts estimate that 25% of the energy released during candle combustion radiates into the environment.

The area’s temperature rises as a result of this.

The body loses water through sweat, breath, and evaporation when dehydrated.

As a result, it’s imperative to consume plenty of water to stay hydrated while burning candles.

Sleeping in a bedroom with burning candles makes asthma and allergies worse.

When a person genetically predisposes to have a significant inflammatory reaction to particular chemicals, allergic diseases might arise.

Candle burning releases a variety of chemicals that can set off asthma attacks and other allergic reactions.

People who suffer from allergies, conjunctivitis, atopic dermatitis, and asthmatic reactions report having these conditions worsen when they sleep in a room with lit scented candle(s) nearby.

It is difficult for doctors to treat people constantly surrounded by candles.

The best course of action is to spend less burn time.

Having candles lighted while you sleep can make headaches and migraines more likely.

Toluene is a chemical compound that affects the central nervous system, similar to those of ethanol.

When a candle burns, doses of toluene is released into the atmosphere, if you inhale it, it goes directly to your lung.

The length of exposure determines the effects of toluene.

Even a modest amount might result in headaches, migraines, nausea, dizziness, and exhaustion. Taking a large dosage might result in numbness, sluggishness, sleeplessness, and loss of consciousness. Some people have been known to experience seizures, respiratory depression, staggering, and even death when taking too much caffeine.

Toluene, found in burning candles, is classified by the European Chemical Agency as a toxic reproductive agent because it can cause damage to an unborn child if a woman breathes it in during pregnancy.

Premature birth, heart problems, and limb malformations are among the birth disorders brought on by toluene.

Smoking and alcohol consumption increase the risk of having children with congenital malformations.

Six studies show a higher incidence of spontaneous abortion owing to toluene, according to JA Bukowski’s analysis of the epidemiological data on substance and reproductive health.

I want to reiterate that even while candle flames only contain a very small amount of toluene, they can increase the body’s overall exposure.

Toluene is found in many household items, including paints, glues, nails, polishes, scents, and cigarettes.

Toluene becomes harmful if the total dose from all of these sources surpasses a particular threshold.

When burning candles, be sure to use them safely by keeping them away from children and pets.

Toluene gets into our bodies by breathing in soot from domestic candle fires.

The respiratory system absorbs 60 to 75 percent of the toluene, which then enters the bloodstream.

The liver breaks down the effects of toluene depending on its different metabolites, which are then eliminated from the body via the kidney.

Toluene is a lung irritant that can result in chest discomfort, breathlessness, and pulmonary edema.

It causes respiratory depression by irritating the mucous membranes in the respiratory tract.

ATSDR is an independent federal agency within the U.S. Department of Health and Human Services responsible for protecting human health from toxic chemicals.

They claim that persistent exposure to toluene might cause fluid to accumulate in the lungs, obstructing breathing.

When a dose of toluene is extremely high, kidney failure may occur.

Toluene can harm the kidney’s glomeruli and tubules, according to research.

Exposure to toluene can cause the kidneys to fail by forcing them to die off.

Toluene may increase the risk of end-stage renal disease that doesn’t respond to conventional treatments for people who already have chronic kidney diseases.

If you drink too much toluene, you may experience liver damage, including jaundice, deterioration of the bile ducts, abnormal liver function tests, and even hepatic failure.

Toxic candle fumes can be released from some candle types. Your exposure to these paraffin candles should not be prolonged.

Synthetic fragrance oil additives use toxic chemicals to create their artificial scents. Paraffin is made from petroleum products.

Paraffin wax, a byproduct of the petroleum industry, produces carcinogenic gases, including toluene and benzene, upon combustion. These substances are classified as carcinogens because they cause cancer in humans.

Normal use may reduce the danger, but there’s no need to let it affect your sleep.

If you have a candle burning in your bedroom overnight, the wick may become deformed or “mushroomed” due to carbon accumulation. As a result, the shape of the candle’s flame is altered. The twisted flame creates soot and smoke.

The soot and smoke may penetrate your lungs and create black marks on your walls, ceiling, and draperies.

A British woman in October 2009 took a snooze before work and forgot about a clean candle she had lit.

Amid a cloud of smoke, she awoke sometime later, choking on her phlegm and releasing black fumes.

She needs oxygen, and doctors say that if she’d gone to sleep any longer, she might never have woken up.

If you leave a candle burning for too long, the wick might get stuck at an angle and cause the flame to flicker.

If the wicks become unevenly distributed, the flames will be concentrated on one end of the candle, causing it to burn hotter than the other. As a result, the candle may break, sending pieces of glass and melted wax flying.

Indeed, this has transpired in my own life.

My wife was away visiting her relatives, and I was stuck in front of the computer for hours. As a result, I’ve been able to play video games and watch videos from my favorite YouTubers.

While I was writing this, a Yankee Buttercream candle was lit nearby, and I left it unattended for too long, causing the wicks to shift and begin heating the jars instead of the centers of the wax.

The next thing I know, the conventional candle jar has exploded, and pieces of glass and hot wax are all over my computer and workspace.

That day, I realized I needed to pay more attention to the candles I used.

Candles are frequently used for spiritual occasions, to promote relaxation, and to uplift the mood.

However, sleeping with candles lighted increases the risk of skin burns, accidental fires, and respiratory difficulties.

Therefore, it is not advised that you sleep with high-quality candles burning.

Use candles strictly under supervision, and only when you are awake.

Moreover, it would help if you also read our article about wet spots on candles and how to get rid of them.

How long does a candle have to burn?

Lighting jar candles for more than four hours is not recommended at bedtime. The wax and the container will heat up to an uncomfortable temperature any longer than this.

Candles, do they go out on their own?

The majority of candles will extinguish on their own in perfect conditions. It would help if you always put out the candle yourself to ensure safety rather than taking a chance that it may go out on its own.

Why does the burning of my candle cause it to produce soot?

This is probably because the wick has to have some excess length cut off of it.