Soy Wax Candle Is Frosting? Some Possible Reasons As To Why! 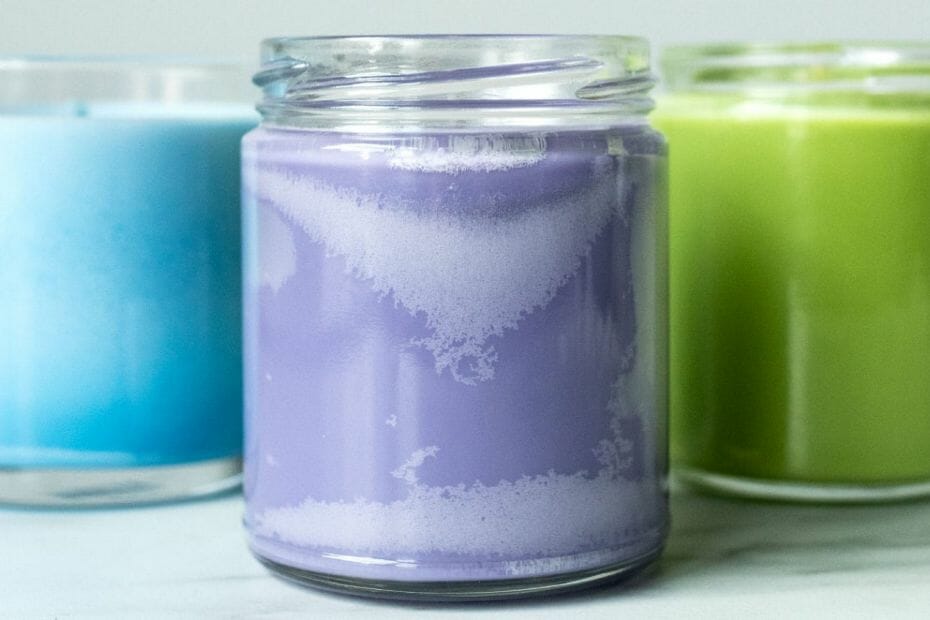 Soy Wax Candle Is Frosting? Why It happens and how can we stop it?

If you’ve gone to the trouble of starting to make your soy candles, you’ve undoubtedly already experienced the effects of icing. What are those whitish things that seem like crystals on the exterior of your candle?

Yes, you’re looking at soy wax frosting. Candle frosts are formations that resemble white crystals on the outside of a candle. This is a typical response among candles made from soy wax and others created from vegetable waxes. Candle frosts, sometimes known as blooming, are characterized by developing a stable crystalline structure or whitish-colored layer on the surface of both artificial/natural waxes.

Though the candle frosts may seem poor quality, it does not affect a candle’s burning capabilities or scent. It is simply a matter of taste and preference. Frosting on a candle indicates that it is made from 100% natural soy wax rather than a mixture which could be hazardous.

Why does soy wax frosting occur?

The frosting is an unfortunate side effect that nearly always occurs while using soy candles.

Frosting on soy wax candles is natural and can be expected. Frosting occurs when oils are combined with soy wax, particularly during temperature fluctuations. Polymorphism, which causes a substance to form crystals unpredictably, is responsible for forming frosted crystals. It’s just aesthetic and has no bearing on the candle’s functionality.

It is nearly difficult to avoid creating crystal structures when working with most soy waxes.

Why do soy wax candles frost?

Temperature and time are the most significant contributors to the problem. Because soy wax “hardens” during its lifetime, we can say that crystal structures never stop developing within it (even if we cannot observe this process). The phenomenon known as polymorphism is to blame for your soy wax candle’s gritty or shiny appearance. A grainy look is produced by larger crystals, whereas smaller crystals produce a “shiny” appearance.

What can we try to stop frosting?

To create a candle wax suitable for use in candles, the candle wax manufacturers have previously struggled against the wax’s tendency to be unstable and polymorphic.

When the soy wax arrives at your workshop, there’s nothing more you can do to prevent it from icing over because you’ve already completed all that is possible.

Take into consideration the following options, and see whether any of them meet your requirements:

The crystals are more likely to act erratically during temperature fluctuations. Every time the temperature goes up or down, there is a possibility that the wax will re-crystallize. This is one of the reasons why the surface of a soy wax candle that has just been burned has a great deal of unevenness.

When the wax that had been melted solidified, it altered the structure of the crystals on top. It will be beneficial if you give the soy candles you have just poured the opportunity of candle cure for two weeks in an area that is not subject to significant fluctuations in temperature and humidity.

Although there is no foolproof method for frosting, the temperature has a significant role, particularly at the beginning of a candle’s life cycle.

The frosting is a natural occurrence in soy wax, although it might be difficult to notice if the candle is colorless or stored in an opaque candle container. If your outward look is very important to you, this may not be the best choice, but it will get the job done.

Because it is much more difficult to discern a candle with frosting in a colorless blend, you can conceal the look of the frosting by maintaining the natural color of the wax. On the other hand, lighter colors make icing appear to have less depth and dimension, although your mileage may vary.

If you want to color the wax but also want to cover the frosting on the edges, you should try using a darker or more opaque container. If you don’t want to use a jar made of amber glass, frosted glass is a good alternative. If you go this way, you can access thousands of different possibilities.

Use a heat gun

The soy wax that has been poured will continue to harden and crystallize throughout its lifetime, but most of this hardening will occur within the first two weeks after it has been poured.

The method is straightforward when using a heat gun:

If you are thinking about what would happen if you didn’t cure your candle, then read our article to know about it.