Wax Melt Vs Candle – Which Is Better & Why? 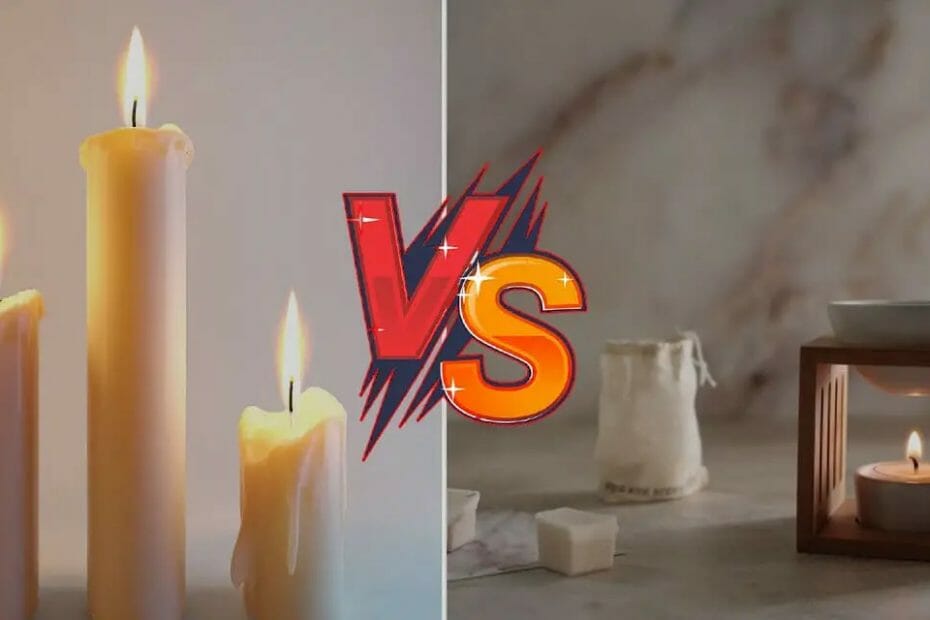 Wax Melt Vs. Candle – Which One Is Better?

When it comes to fragrance, there are many different ways to go. You can use candles, wax melts, or even oils. So which is the best way to get your desired scent? Well, that depends on a few things. In this blog post, we will look at both wax melts and candles and see which one is better for you. We’ll also discuss the pros and cons of each option so you can make the best decision for your needs. Are you ready to learn more? Keep reading!

When filling your home with fragrant scents, you have two main options: candles and wax melts. Both have unique benefits, so choosing the option that best suits your needs is important.

Candles are certainly the more traditional choice, and they come in a wide variety of shapes, sizes, and scents. One of the main benefits of candles is that they can be used for a long time; once you’ve burned through the wax, you can replace the wick and continue enjoying your candle. However, candles can be messy and require regular maintenance to keep them burning properly.

Wax melts, on the other hand, are a relatively new invention. They’re made of solid wax that’s infused with fragrance, and they’re designed to be used with heat-responsive diffusers. Wax melts offer several advantages over candles; they’re less messy, they provide a more consistent scent, and they’re safer to use around children and pets. However, wax melts only last for a limited number of uses before they need to be replaced.

So which is the better option for you: wax melts or candles? It depends on your personal preferences. If you want a classic look and feel, go for candles; if you prefer convenience and safety, wax melts are the way to go.

But we like wax melts over candles, and we have also discussed the 10 reasons why it is better than candles.

Moreover, you should also read our article in which we in-depth explained the history of candles, who invented them and where do its start.

National Fire Protection Association estimates that candle-related fires were responsible for approximately $278 million worth of direct property damage between 2014 and 2018. Candles for decorative purposes are endearing, but because the flame is visible, there is a danger that the candle might accidentally set fire to another object.

Wax melt warmers need electricity, unlike candles, which need a flame to function. An electric wax melts warmer preheats scented wax tarts, melts, or cubes. These warmers often include either a miniature light bulb or a built-in ceramic heater positioned within the warmers themselves. The in-built heater generates the right amount of heat to melt wax melts, tarts, or cubes, and the fragrance may be released in as little as 5 to 10 minutes!

Both the average time for a wicks-melted wax to burn down and the typical time for a wickless wax to burn down can be impacted by various circumstances. For instance, the average time for the wax to burn down when using wicks can be impacted by the wax used (e.g., paraffin vs. beeswax), the amount of fragrance oil added, the melting temperature, and the size of the wax piece. Similarly, the typical time for the wax to completely burn down without wicks can be determined by the kind of wax (e.g., beeswax vs. paraffin) used, the amount of scent added, the melting temperature of the wax, and the size of the wax piece.

Some enjoy the smell of burning wood, and others find it offensive. Some may also prefer the taste of melted paraffin. However, if you’re not careful, you can end up with a mess on your hands. Paraffin burns much hotter than wood, so it takes far less time to melt down. In addition, paraffin is cheaper than wood and easier to obtain. So, if you’re planning on melting down some old Christmas tree branches, make sure you’ve got plenty of paraffin handy.

Candles typically cost between $18 and $20, although their price can easily exceed $50 depending on the brand, fragrance, and formulation. The average candle costs between $18 and $20. On the other hand, the cost of wax melts can range anywhere from $5.00 to $25.00 on average, determined by the quantity ordered all at once.

Multiply the typical price of a single stick of incense (usually between $10-$20) by the number of sticks you typically use in one sitting (usually two). You will find that the total price of incense used during an entire night is approximately equal to that of a single stick multiplied by the number of hours spent burning incense. For example, if you spend eight hours burning incense, the total price of incense used would be equivalent to the price of a stick times 8 hours. Since most people use incense daily, they could save hundreds of dollars a year by switching from candles to incense.

Burning paraffin wax may result in benzene emission, according to research published in 2009 by South Carolina State University. If you are not aware of the dangers that are involved with being exposed to benzene, you should know that the American Cancer Society considers benzene to be a carcinogen, which is a material that encourages the development of cancer.

Having stated that, there are still some companies that make use of paraffin. These companies typically use paraffin. These firms are slipping further and further behind the times. Checking out the list of ingredients is one thing we suggest you do before making any buys.

Moreover, removing candle wax from carpets is a very tough job. Read our article to learn the easiest way to do so.

5. It is more convenient than candles

In most cases, using wax melts and wax warmers is permitted in locations that prohibit jar candles owing to their open flames, such as workplaces, flats, dormitories, and other similar settings. In addition, parents concerned about their children being near an open flame hold the melting of wax in very high regard.

They’re convenient because you don’t need lighter fluid or matches to use them, and the wax is small enough to be easily broken into smaller pieces and transported. They come in different sizes, so it’s easy for you to break them up and carry them.

Simply placing a wax melt into a wax melt warmer and forgetting about it is the best way to ensure that your location maintains a pleasant aroma for an extended time. The lifespan of wax melts ranges anywhere from eight hours to two days.

6. It has more fragrance load than candles

Customers frequently wonder, “Are wax melts more durable than traditional candles?” in response to this statement. This motivated us to conduct internal research in which we compared the average scent load of wax melts to the average fragrance load of candles. Most candles have an oil-to-wax ratio of one ounce of fragrance oil to sixteen ounces of wax per container. Candles will also heat the room. You can also read our article in which we discussed exactly how many articles will heat the room.

This gives them a fragrance load of approximately ten percent more than unscented candles. When we conducted an in-house investigation on the typical fragrance oil concentrations found in wax melts, we discovered that many wax melts were capable of holding fragrance loads of 11–12% or more!